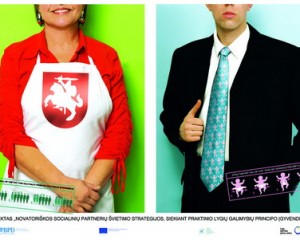 Project goals:
- To raise awareness in society and to build opposition for discrimination due to gender.
- To promote social dialogue on the prevention of discrimination against marginalized groups.
- To change stereotypical views on the roles of men and women in society and about
marginalized groups.
- To increase women’s motivation and professional qualifications in the labor market.
- To encourage men to assume the same responsibility as women for childcare and in that
manner to help change employers’ attitude that women constitute a “risky” and
“unattractive” labor force.
-To support employers’ innovative management strategies allowing the reconciliation of
professional and private spheres for both women and men.
- Promote social policies that encourage the reconciliation of private and professional life.

Project activities:
- From February to December of 2007, CEA organized 20 trainings on gender equality and
related issues in all of Lithuania’s regions.
- Performed scientific research which aimed to analyze public opinion about gender
stereotypes and evaluate experiences in labor market.
- A public informational campaign was prepared. The campaign included billboards and
postcards in which brief information and statistics about the spheres most often affected by
gender-based discrimination was provided.
- Information television and reporting cycle: 52 subjects were prepared for the television show
“Jeigu” (“If”), which analyzed discrimination due to gender, age, ethnic/racial origin,
disability, and social status.
- CEA prepared 25 social advertising reports, which were televised once a week. For each
broadcast, comments and articles were prepared and posted on the www.alfa.lt website.
- At the time of each “If” broadcast, an instantaneous social survey about issues related to
gender equality and employment was conducted.
- Prepared and published a manual for employers, Improvement of the Labor Relationship and
Environment, edited by Margarita Jankauskaitė and Aistė Paškauskaitė, 2007 (Darbo
santykių ir darbo aplinkos gerinimas/ sudarytojos Margarita Jankauskaitė ir Aistė
Paškauskaitė, 2007).
- Prepared and published a compact disc, Equal Opportunities: Rhetoric and Practice.

Project partners: Office of the Ombudsmen for Equal Opportunities,  Center for Equality Advancement