Gender Mainstreaming: from Concept to Action 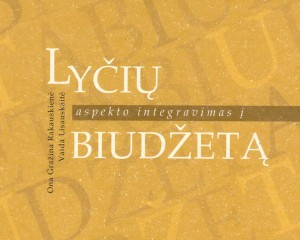 Project goal is to mainstream gender in the national policies and encourage the systematic and transformative approach to gender equality, equal participation of men and women in decision making process and gender roles in society.

Project activities:
> The Center together with the Office of the Ombudsperson for Equal Opportunities organized and conducted the training of the civil servants, applying the 3R method, to generate a separate analysis of the gender equality situation and to include gender aspects when evaluating the present situation, devoting resources and foreseeing in action plans how the present situation can be changed.
> From January to September of 2008 five seminar cycles (2008 February 28-29, Druskininkai; 2008 April 3-4, Trakai; 2008 May, Palanga; 2008 September 3-5, Palanga; 2008 October 15- 17, Trakai) were held for the civil servants who got a methodological tool to investigate the everyday policy development through the lens of gender equality. Having participated in a
lecture and learned about skills for applying the 3R method at work, participants were tasked with carrying out a small research project on their own using the 3R method and with presenting the project’s results and an action plan abut gender equality integration into their municipality’s daily work.
> In September 2008, the civil servants got the unique opportunity to obtain knowledge about the gender budgeting. The visiting scholar Sheila Quinn provided the theoretical knowledge and practical skills on the understanding and composing gender-sensitive budgeting
> Promotional materials (1500 copies of calendars, 340 table clocks with gender equality slogans) were prepared to keep the gender interest of the participants and attract their colleagues’ attention to gender aspects in their work
> National conference. 2008 October 20 was held in Vilnius. The first national conference on gender mainstreaming and gender budgeting issues with a focus on the development and effectiveness of the state policies
> A manual on gender budgeting. Prepared and published in Lithuanian, provided theoretical materials, research results in Lithuania and good practices in the EU on gender budgeting.
> Rakauskienė Ona, Vaida Lisauskaitė. Lyčių aspekto integravimas į biudžetą (Gender
budgeting). Vilnius, 2008
> The manual on gender budgeting together with the promotional materials were sent for each parliamentarian after elections in October 2008. Only one parliamentarian, Ceslovas Jursenas -the member of Social Democrats party, replied and expressed his interest in the book.
Project coordinator:
Office of the Ombudsperson for Equal Opportunities
Municipality of Siauliai

The project is financed by the European Commission under PROGRESS Programme